St Francis of Assisi Catholic Church  /  About Us  / Parish Saint

St. Francis of Assisi - The Patron Saint of Our Parish 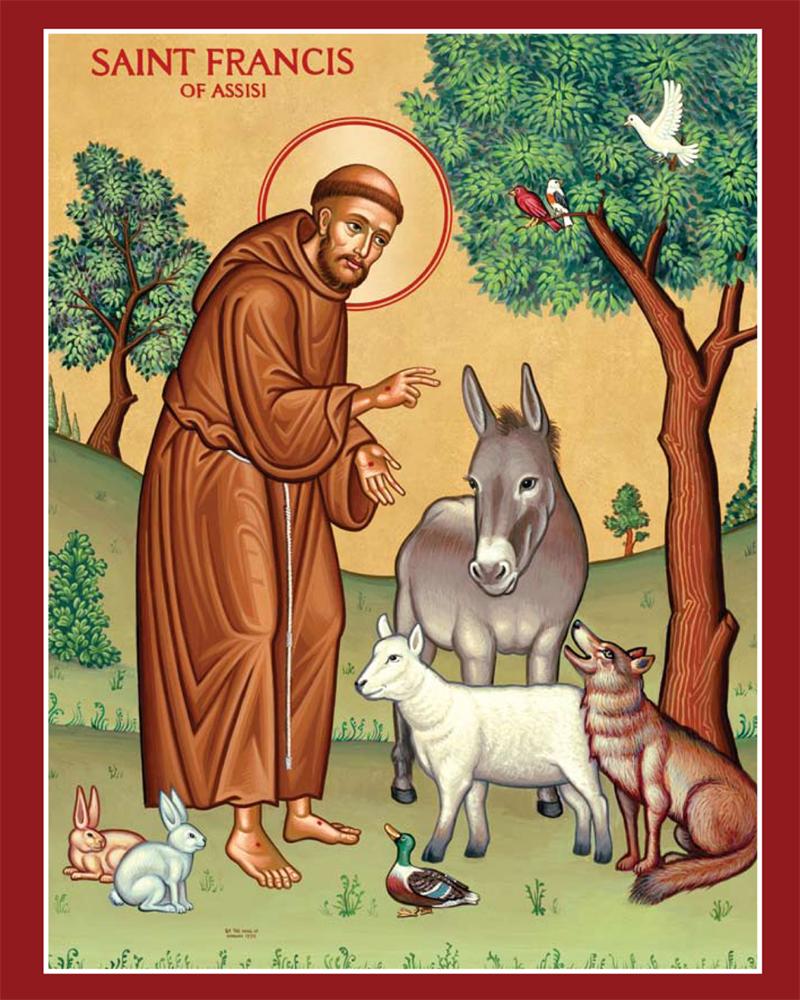 St. Francis of Assisi (from A Christian Pilgrimage)

Who is St. Francis of Assisi?

Friend of the poor. Brother to all creation. A man of poverty. A man of peace.

This is St. Francis of Assisi: A man born into wealth who, as a young adult inspired by God, devoted his life to caring for the poor and marginalized. He is one of the most loved and popular of all saints, not just by Catholics but by people throughout the world, and is perhaps best known for his prayer that begins, “Lord, make me an instrument of your peace . . .”

Born in Assisi, Italy around 1181 A.D., Francis led an untamed life in his youth, enjoying the excesses of a wealthy family. About age 20, he became a soldier, but ended up in prison and soon fell ill. Through a vision, he began a different life when he was released, one filled with prayer and service to the poor. He gave away his worldly goods and dressed in a simple peasant’s tunic with a rope for a belt. He befriended beggars and began to travel the countryside, imploring people to do penance and to practice brotherly love.

Because of the care St. Francis showed others through his remarkable life of simplicity, many of those who had earlier mocked him became his followers. Soon they became known as Franciscans.

St. Francis died on October 3, 1226 in Assisi. His feast day is October 4, when household pets are traditionally brought to church to be blessed, in much the same way Francis cared for animals as part of God’s larger creation.

The humility and poverty that filled the life of St. Francis also earned him the designation “patron of care for God’s creation” by Pope John Paul II. “As a friend of the poor who was loved by God’s creatures, St. Francis invited all of creation—animals, plants, natural forces, even Brother Sun and Sister Moon—to give honor and praise to the Lord,” said Pope John Paul. “The poor man of Assisi gives us striking witness that when we are at peace with God we are better able to devote ourselves to building up that peace with all creation which is inseparable from peace among all peoples.”

One of his legacies is The Canticle of the Sun, known to many Catholics for the version put to music by Marty Haugen. A musical prayer of gratitude to God, The Canticle of the Sun shares Francis’ belief in the basic unity of all creation and his own place in its midst. The song thanks God for such creations as “Sister Water” and “Brother Fire.”

When the former Cardinal Jorge Mario Bergoglio became pope in 2013, he chose to be called after St. Francis of Assisi. "How I would like a church that is poor and that is for the poor," Pope Francis told media representatives just after his election by the conclave of cardinals.

Bishop John Leibrecht, bishop emeritus of the Springfield-Cape Girardeau Diocese, chose the name for this new parish in Nixa when it was formed in 2004. We celebrate his Feast Day with a Mass followed by the blessing of pets.

According to Franciscan tradition, the cross of San Damiano was instrumental in the life of St. Francis. It was while praying before this cross in the chapel of San Damiano, just outside Assisi, that he received a call to rebuild the Church.

Led by the Spirit he went in to pray and knelt down devoutly before the crucifix. The image of Christ Crucified spoke to him, “Francis, go rebuild my house; as you see, it is all being destroyed.” That task meant Francis had to transform himself first. He quickly realized that the rebuilding process had to include the transformation of his heart. He would have to rebuild his inner self, and in doing so, discover his true identity. A simultaneous vocation unfolded: rebuilding the place and rebuilding his person.” - From Franciscan Media

The cross now hangs in the Basilica of Saint Clare in Assisi, Italy, with a replica in its original position in the church of San Damiano nearby. In addition to the image of Jesus, the cross portrays a deeper story depicting the witnesses of the crucifixion, the Virgin Mary, St. John the Evangelist, Mary Magdalene, Mary Mother of James, St. John, St. Michael, St. Rufino, St. John the Baptist and St. Paul to name a few.

Our parish uses the San Damiano cross with each procession into the church, and on the altar of every Mass.

LEARN MORE ABOUT THE CROSS 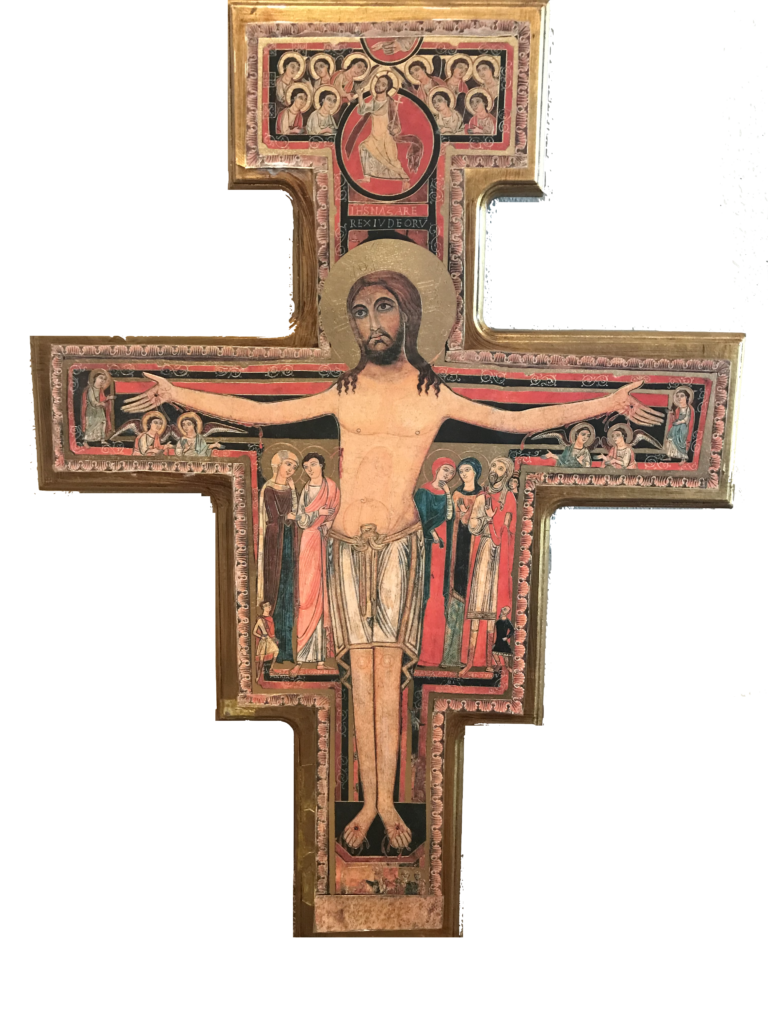 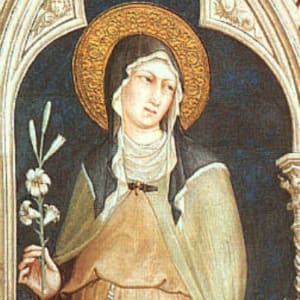 St. Claire of Assisi (from A Christian Pilgrimage)

In 1212, a young heiress of Assisi joined them. Just 18, Clare secretly left her father’s house and joined Francis in a life of poverty and penance, living in the convent of San Damiano. She served the sick, washed the feet of beggars and when she came from prayer, it was said her face was shining so that it dazzled those around her. Popes, cardinals and bishops sought her advice and counsel. St. Clare and other women who joined her became known as the Poor Clares. They lived a simple life of great poverty, completely secluded from the world. - From Franciscan Media

Our chapel at St. Francis of Assisi Parish is named for her.

Francis of Assisi: A New Biography (Cornell) by Augustine Thompson, 2012

The Life and Afterlife of a Medieval Saint” (Yale) by André Vauchez, 2009

The Flowers of St. Francis, by director Roberto Rosselini, 1950